Léon quite rightly detected an interest in some of my abstract architectural compositions in Corbusier’s Purist paintings and we shared the sense that there was a link between those paintings and the Beaux Arts Analytiques or earlier plates showing the architectural orders such as in the Quattro Libri. For my part, I was taken by the possibility of the signature on the painting, LC revisioned by LK painted by CL!

Léon’s intention was to exhibit a painting of the “revisioned” Pessac with his drawings. At the moment, there is still not a venue or date for this, but this is the 50th anniversary of LC’s death so it would be appropriate for it to happen this year.

The painting is based on one of Léon’s sketches.

Essentially, the idea is that what was built in Pessac is but a suburb and to become a proper community it needs the amenities of a community, not just housing. These amenities were planned by LC in a second phase which has never been realised. Léon has introduced them into a replanned neighborhood which has a more urban feel to it with public squares, a church, town hall, market and club.

I went to Pessac to get a feel for what LC had done there and was pleasantly surprised to see how it is slowly being restored. I remember photos of it when I was in university showing how it had been made “more traditional” by the inhabitants with stone and brick veneers, pitched roofs, new window treatments, etc., some of which were still in evidence, but for the most part it has been returned to its original intended appearance. I made a series of small paintings of details of Pessac to ease myself into the project and get a feel for the architecture – worlds away from the Lutyens architecture I had just finished painting: 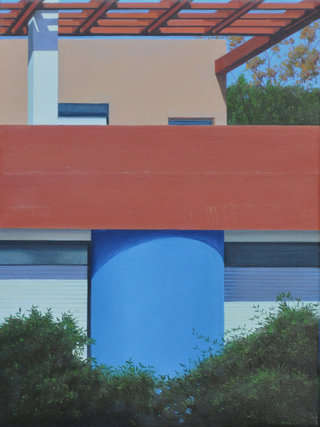 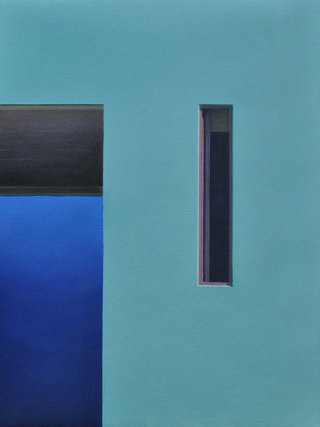 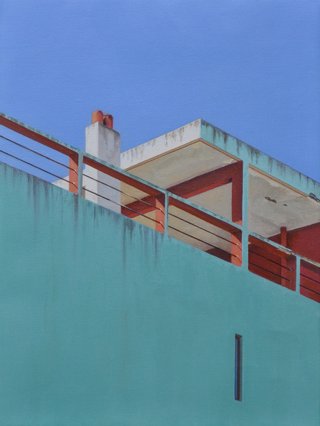 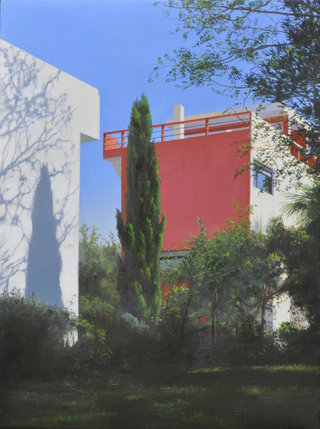 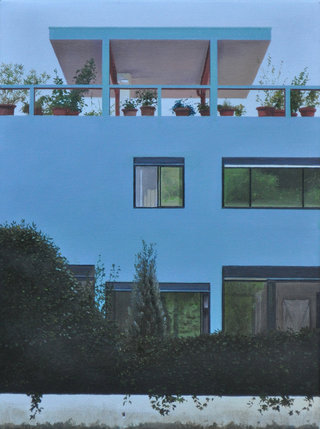 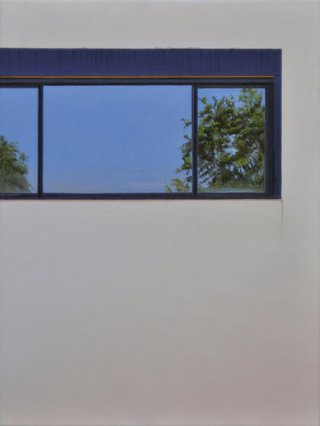 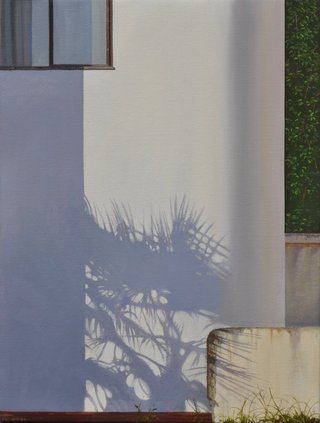 I went on to try and set up Léon’s sketch in a measured perspective which presented a myriad of problems, partly caused by its extreme panoramic width, far beyond what human vision can encompass and partly due to Léon’s poetic approach to drawing which describes the essence of a design rather than its more prosaic physical reality. I found myself struggling to reconcile his vision with a realistic depiction of the design. This resulted in a lively and productive correspondence shaping the painting so that it eventually, hopefully, expressed both our approaches.

This first start that was set up mechanically from the site plan was far too detached from the place, the buildings too small in relation to the canvas, so I began again with some of Leon’s perspective distortions incorporated.

Colours now became an issue. Originally, the new buildings Léon introduced were to be fully coloured, red for the church, green for the church campanile, blue for the town hall. The campanile colour was then thought better to be red like the church.

At this point I wondered if the light might be better coming from the right rather than the traditional sun over the left shoulder. It would perhaps give better definition to the gratte-ciel by placing one facade in sun and the other in shadow, maybe define the campanile better in relation to the adjacent stair tower and avoid casting the shadow of the campanile on the gratte-ciel.

Léon preferred the light from the left as it had been. He also felt that the colours on the buildings he was introducing were not working and they would be better white with some smaller areas of colour. I decided to make a small sketch which recorded the red church and the light from the right.

I also decided there were so many changes in altering the colours and direction of light that I might as well set up another painting incorporating some other changes like reducing the height of the canvas and pulling in the sides to concentrate still more on the buildings, lowering the trees and changing the foreground, and introducing some changes Léon wanted to see such as altering the perspective on the closest gratte-ciel to see more of the side and increasing the comparative size of the church. I would then keep the already existing painting for trying out various colours and compositional alterations. I think these changes made the buildings more prominent and made the whole composition feel much closer to Léon’s original drawing.

I referred to Le Corbusier’s 1910-29 volume of L’Oeuvre Complète and his description of the use of colour on the buildings in Pessac to place colours in sympathy with his theory. His approach was to break up the mass presented by all white buildings concentrating on planes and surfaces rather than mass to create a lighter architecture that expressed space in a more complex way. Burnt Sienna used to attract the eye. Blue used to make buildings recede and green to make surfaces disappear into the landscape.

From this point onward, I worked on both paintings, trying things out on the first painting before introducing them into the second.

I felt there was a third approach that might be more in sympathy with Le Corbusier’s use of colour at Pessac. An approach that concentrated on surface and colour rather than a more literal realism. Bright and pure colours rather than texture and shadow, lightening the overall image.

In truth, I achieved this earlier in the first stage of the second painting: