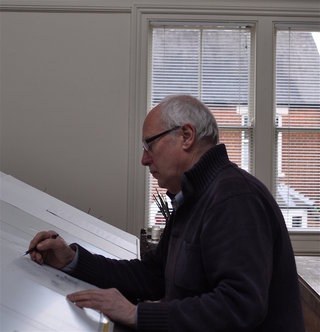 Carl Laubin is a British/American artist, born in New York in 1947. He studied architecture at Cornell University, moving to London in 1973 and becoming a British citizen in 2000. He worked for a number of architectural firms in the UK, but was primarily with Douglas Stephen and Partners and then Jeremy Dixon. It was while working for Jeremy Dixon that he was encouraged to make his first architectural paintings, going on to illustrate the firm’s redevelopment of the Royal Opera House. After the Royal Opera House paintings, in 1986, he was able to devote himself full time to painting.

His work has since retained architecture at its centre but has also included many landscapes, a series of paintings of sculpture and occasional portraits. He has perhaps become best known for the series of architectural capricci that he has produced, beginning with two paintings of Bordeaux chateaux for an exhibition on Bordeaux at the Centre Pompidou in 1987. These were followed by capricci of the work of a number of architects, beginning with Palladio, followed by Wren, Hawksmoor, C.R. Cockerell, Claude-Nicolas Ledoux, John Outram, Léon Krier, Palladio again, Vanbrugh, Lutyens and most recently Leo von Klenze. He is now beginning a painting of the architecture of John Nash.